Pace yourself, a conservative first half will pay off in the end.

Written turn directions for pre-race training or to drive the course.

Watch a virtual tour of the race course. 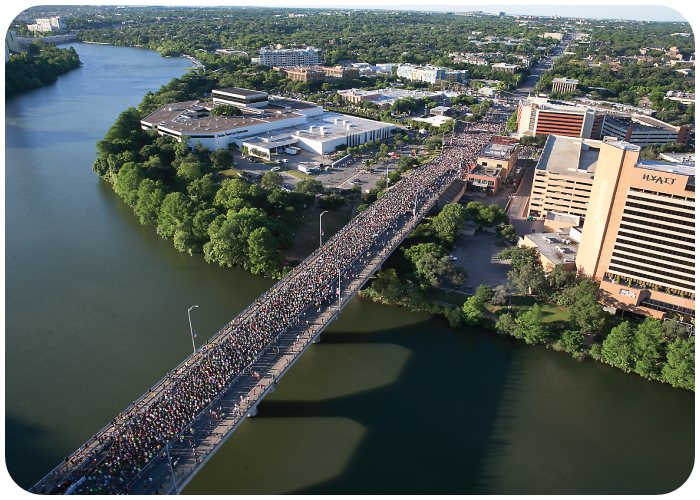 The Capitol 10,000 is Austin’s oldest annual race and a rite of spring event for Texans and visitors from around the county. Runners gather each year on the Congress Avenue bridge stretching over Lady Bird Lake (Colorado River) just after sunrise to celebrate the tradition spanning 45 years. The buzz mounts as news helicopters and drones hover in the distance awaiting the announcement of the starting horn. The Austin Fire Department unferrels a three-story American flag from the basket of a ladder truck to point races to the starting line. Organized in pace waves, each group of runners is corralled through the starting truss for the largest 10K race in Texas. With their sights set on the State Capitol building, looming in the distance, runners travel straight up Congress Avenue through the center of downtown.

The historic Paramount Theatre sits along the course and plays host to one of many live music acts that perform as runners pass. The city known as The Live Music Capital of the World delivers live performances sprinkled along the racecourse keeping to the rhythm with the footsteps of the runners.

In the shadow of the capitol, building runners check off mile one and pass one of Austin’s newly renovated Waterloo Neighborhood Park & Amphitheater. Around the corner, the first aid station doesn’t come soon enough before runners turn onto 15th Street and start the first set of rolling hills.

On 15th street runners enjoy lots of extra room to maneuver as the road opens to a wide six lanes. Nestled between the buildings in this section of the course, runners get a chance to pass two notable Austin towers. The University of Texas clock tower rises from the center of the campus a mere six blocks away. And close enough to touch, runners pass the historic #6 Moonlight Tower popularized by the movie “Dazed and Confused” featuring local favorite Matthew McConaughey.

Approaching the three-kilometer mark, runners begin to shake out their arms and wipe the sweat from their brows. The anticipation of charging the King & Queen of the Hill segment for the fastest hill climb looms. Cresting the hill and checking off mile two, runners enjoy a long downhill to recover. Riding the downhill slope, runners pause at the intersection of Enfield Road for one of the race’s most iconic photo locations.

The view of looking back towards the city showcases a spectacle of humanity spilling over the hill. This location was popularized after the 1985 race when the bobbing of heads and the pink color race shirt contributed to the attribution of Pepto (Pepto Bismol) flowing down the street.

The course narrows down by half when 15th Street merges into Enfield Road and enters the Clarksville Neighborhood. The highest point on the course is just past the four-kilometer mark, only 119-feet about the starting elevation. This historic neighborhood is home to the Treaty Oak, a 500-year-old Texas live oak tree, and more importantly the second-course aid station.

Approaching the five-kilometer mark runners check off mile three and the halfway point in short order. Timers at the 5K mark will automatically record your race time and upload it instantly to your race profile and personal race results. Marked by a wall of enthusiastic sound, the local high school horn ensemble makes the most of the bridge acoustics as runners dip under MoPac Expressway.

Turning onto Winsted Lane the course narrows down by half again as runners travel south through the Tarrytown Neighborhood towards the river. Another local band showers energizing album cover hits down from a hilltop patio, as runners approach a short ascending set of hills. The third and largest aid station greets runners as they crest the hills and a long sloping downhill builds back their confidence.

Hydrated and refreshed from the recent downhill segment, runners will make two quick turns onto Lake Austin Boulevard and then Veterans Dive before dropping down to the river and checking off mile four. A familiar spot to most Austinites, The Rock at Town Lake, is the Ann & Roy Butler Hike-and-Bike trailhead where training runs start and finish leading up to the Cap10K.

The course terrain flattens over the next segment of the course as runners pick up the tempo and make a sweeping loop around the Stephen F. Austin High School campus. Another familiar training venue to local clubs and groups, the high school track is a popular spot where runners sharpen their leg speed. Making a narrow turn eastbound onto West Cesar Chavez sends runners back into downtown along the northern shoreline of the Colorado River. Nestled in the spring wildflowers along the road, the 8-kilometer mark, the final course aid station, and mile 5 mark, quickly approach.

Runners dip under the arches of the Lamar Boulevard Bridge and emerge to the cheers of spectators above on the adjacent Pfluger Pedestrian Bridge.

Marking the 9-kilometer point is Block 185 and the latest addition to Austin’s developing skyline. The new building, fully leased by Google, creates the overall effect (as many have noted) of a sail eternally catching a breeze from the lake across the street. Two short blocks further and runners will make a sweeping turn onto the South First Street Bridge. More live music from local drum and bugle corps usher runners towards the final kilometer.

From the bridge, runners start to sense the mounting enthusiasm of the finish as they overlook the Finish Line Festival on Vic Mathias Shores. Spectators line the course with signs and cheers as runners check off mile 6 and make their final turn onto West Riverside Drive. Runners take advantage of the extra room to maneuver as the course opens up to a four-lane park road split by a narrow median approaching dual finish lines. The sound of the race announcer draws runners down the final meters of the chute. After crossing the finish line, runners are gently shuttled through the finish corral to receive water and an official finisher’s medal, before being reunited with friends and family in the Finish Line Festival.

Who will top this year’s podium in the winner’s circle.

Pace yourself to a Texas sized finish line.